Transfer from Luton Airport to Coventry 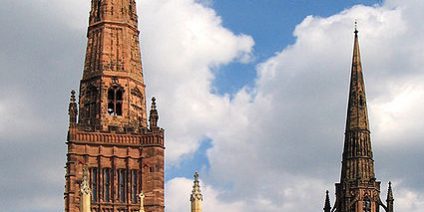 Transfer from Luton Airport to Coventry

First recorded in 1043 when Leofric, Earl of Mercia, and his wife Lady Godiva established a Benedictine abbey here Coventry is today the 9th biggest city in England. It’s significance started to take shape in the 14th century, when Coventry grew to be an important place for cloth trading. Around the same time period Coventry was given the city status.

Coventry is a beautiful medieval town that tells many stories and legends. For example, it is said that Lady Godiva, Coventry’s most famous person in time, is thought to have ridden through the town with no clothes, on the back of a horse, to demonstrate against great taxes charged by her husband from the residents.  The people were requested to look somewhere else as Lady Godiva ran on the horse but couldn’t refrain himself and it is said that he instantly became blind. Lady Godiva is remembered trough the statues that can be admired in the city center and a wonderful Pre-Raphaelite piece of art by John Collier. The painting can be found in the Herbert Art Gallery and Museum. There you can also admire the sketch experiments of Graham Sutherland’s well-known Cathedral tapestry. An entertaining exhibit covering 1000 years of the town’s history can also be viewed in the Museum.

Transport from London Luton Airport to Coventry by Coach:

Transport from London Luton Airport to Coventry by Rail:

Sadly, there are no direct rail services leaving from London Luton Airport to Coventry. For you to get to Coventry by train you will first need to get to Euston Station. From Euston you will be able eventually to take a train to Coventry. The time of the entire journey, which includes waiting periods, is about 2 hours 45 minutes.

Transport from London Luton Airport to Coventry by Car:

Transport from London Luton Airport to Coventry by Taxi Transfer: