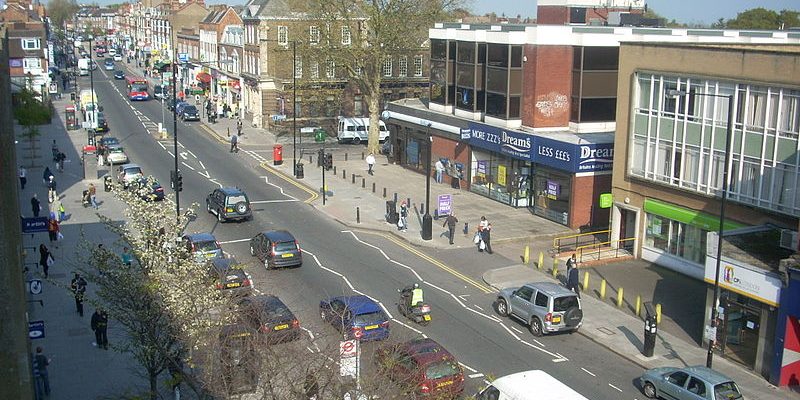 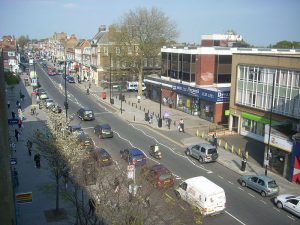 In 1905 tram services were established in Finchley, and extended shortly after to Barnet. They were eventually replaced by trolley buses.

Much of the work was carried out, with East Finchley station being completely rebuilt, until stopped by the Second World War. All passenger services from Finchley to Edgware ended in September 1939. Nevertheless, Underground trains began running from central London to High Barnet in 1940, and to Mill Hill East, to reach the large army barracks, in 1941.

After the war, the introduction of London’s  Metropolitan Green Beltundermined pre-war plans, and the upgrading between Mill Hill East and Edgware (the ‘Northern Heights’ project) was abandoned, although the line continued to be used by steam trains for goods traffic through Finchley, until it closed completely in 1964.

St Mary’s at Finchley is the parish church, with parts dating from 13th century. Avenue House is a large Victorian house (Grade II listed) situated on East End Road. College Farm is the last farm in Finchley, it was a model dairy farm, then a visitor attraction. The Phoenix Cinema in East Finchley with its 1930s art deco facade is one of the oldest purpose-built cinemas in the UK.

The Sternberg Centre for Judaism located in the old Manor House (formerly the convent and school of St Mary Auxiliatrice) at 80 East End Road in Finchley is a Jewish cultural centre. It was founded to facilitate a number of important Reform and Liberal Jewish institutions, attached to the Movement for Reform Judaism.

The Archer is a 10-foot-tall (3.0 m) statue by Eric Aumonierof a kneeling archer captured as if having just released an arrow. Located on East Finchley tube station. The statue La Delivrance depicts a naked women holding a sword, it stands at the approach to Finchley from the south, in Regent’s Park Road, just north of Henly’s Corner.

Veolia Water Central Limited, formerly Three Valleys Water, supplies Finchley’s water; the area is in the south-east corner of the company’s water supply area. EDF Energy Networks is the Distribution network operator licensed to distribute electricity from the transmission grid to homes and businesses in Finchley.

The Finchley Memorial Hospital, on Granville Road North Finchley, is a small NHS hospital administrated by NHS Barnet, a primary care trust. Built with local donations in 1908 it was originally called Finchley Cottage Hospital, but renamed and expanded after the First World War as a war memorial. London Ambulance Service responds to medical emergenciesin Finchley. Home office policing in Finchley is provided by the Metropolitan Police Service. Statuory emergency fire service is provided by the London Fire Brigade, which has a station on Long Lane.

Being in Greater London Transport for London is responsible for transport in Finchley. Finchley is served by four London Underground stations, all on the High Barnet branch of the Northern Line.

Two of London’s major roads, the east-westA406 North Circular Road and the north-south A1meet and briefly merge at Henly’s Corner at the southern edge of Finchley.

Otherwise, you can choose to take a taxi transfer from Finchley Central to Heathrow Airport. It will cost you almost 33 GBP and the journey will take around one hour.