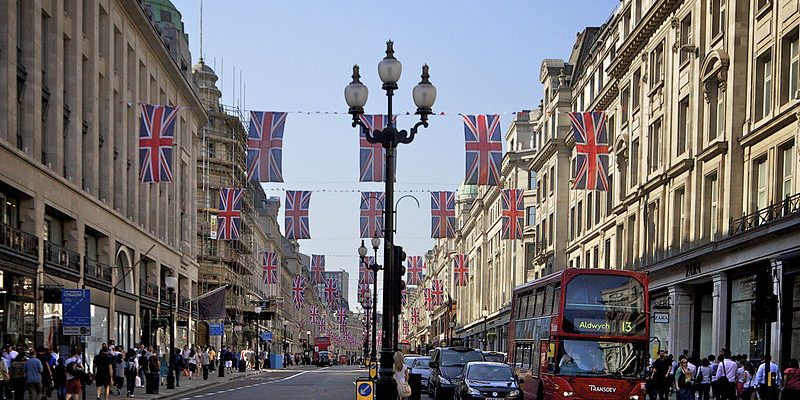 As W1 is one of the major districts in the English capital, being situated right in the heart of London, our first article will be focused on this important historical and economical region.

In a brief description, depending on your point of view, the W1 district could be seen as the economical backbone, the most expensive area or the most luxurious place in London. Comprising places like Soho, Marylebone, Mayfair split by Regent and Oxford Streets, the W1 area is divided into 14 sections, each one having its own distinctive features. The 14 areas are named as follows: W1A, W1B, W1C, W1D, W1E, W1F, W1G, W1H, W1J, W1K, W1S, W1T, W1U, W1W.

As W1A is a non-geographical postcode district, used mostly for routing, direct marketing and PO boxes, we will begin our description on the W1 district with W1B, which covers the Regent and Portland Streets.

There is no doubt that the most important place in the W1B area is the Regent Street. Being finalized in 1825, Regent Street received its name after Price Regent(George IV), and it is many times associated to John Nash, who has created its layout.

The Regent Street, famous for its Christmas illuminations and also known by tourists and English men alike as one of the major shopping streets in the English capital, runs from Carlton House all the way to All Souls Church, crossing trough Piccadilly Circus and Oxford Circus on its way. The Regent Street and its buildings, which are at least Grade II status, form together the Regent Street Conservation area.

History tells us that Regent Street has been from the beginning designed for commercial purposes, under the authority of the Office of Woods, Forests and Land Revenues. The project succeeded as this street holds even today the title of one of the most important shopping places in England. During its construction a lot of demolition was needed for the completion of the project, so many properties had to be bought in order for the construction to be finalized. Even under this circumstances, the expenditure was really low as the design relied mostly on private developers, including John Nash. The construction was approved in 1813 by Act of Parliament.

The street was rebuilt between 1895 and 1927 for financial purposes, as the initial buildings were unsuitable and old fashioned and consequently restricting trade. The result of this reconstruction is the Regent Street that we see today.

Among other less important features of the W1C area, the west part of Oxford Street rises to be the major addition of the region. It is considered to be Europe’s busiest shopping street, comprising no less than 300 shops in 2011, where we can count some of the greatest department stores but also a huge number of smaller shops. It is considered to be the most important shopping street in London and together with Regent and Bond Streets as well as some other smaller, forms the great shopping district W1.

Some of the most important shops you can find when walking on Oxford Street are: House of Fraser, Marks & Spencer, Selfridges, Schuh, John Lewis, Debenhams, Topshop, New Look or HMV.

Once a Roman road which connected Hampshire to Colchester, Oxford Street has been even since its beginning one of the major routes in London, even if under different names. The road was initially called via Trinobantina until the 12th century when it was renamed after River Tyburn and received the title of Tyburn Road until 1782. During this period it was also known as Worcester Road, Uxbridge Road or Oxford Road. In the late 18th century the road received the name it bares today, when Earl of Oxford purchased a great number of lands in the area and helped to the development of the region. It became popular not only for its Pantheon building but also for the masquerades and bear-baiters that entertained the people in the area. The Oxford region became renowned for its shops some decades later, in the 19th century, remaining popular for this fact even until today.

Transfer from London Heathrow Airport to Westminster by Rail:

Transfer from London Heathrow Airport to Westminster by Car:

Transfer from London Heathrow Airport to Westminster by Taxi: