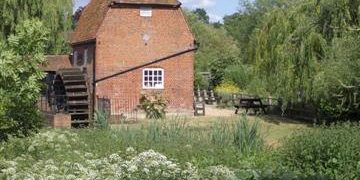 One of the most famous landmarks in Cobham is the Cobham Mill, located on River Mole. It is made of red brick and it was built in 1822. It used to be included in a bigger complex, but the rest of it was destroyed over the years. Until 1928, the mill was still functional. Since the early 20th century it became a storehouse. The county council demolished most of the mill in 1953 and now the only part remaining is the grist mill. This one has been restored and rebuilt throughout the years.

The Preservation Trust that maintained the mill reopened it in 1993. Currently, the historical building can be visited by the public from April to October. It is opened only one Sunday per month between 2 pm and 5 pm.

Transfer from London City Airport to Cobham by Rail:

Transfer from London City Airport to Cobham by Car:

Transfer from London City Airport to Cobham by Minicab: