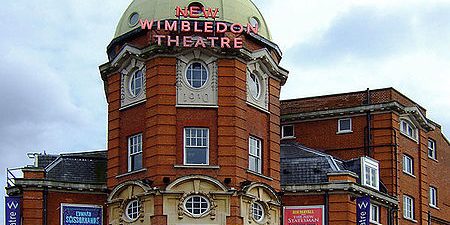 Wimbledon in Merton Borough is home to the New Wimbledon Theatre, an Edwardian structure listed as a Grade II building. It was constructed by J B Mullholland. It replaced a large house. The design of the theatre was signed by Roy Young and Cecil Aubrey Masey. It was officially opened in 1910 and the first production ever played in this venue was Jack and Jill, a classic pantomime. Between the two wars, the Wimbledon Theatre was extremely popular and it featured appearances by Noel Coward, Markova, Ivor Novello, Sybil Thorndike and Gracie Fields.

The theatre building was renovated in 1998 and 1991, but it has preserved its Adamesque and baroque internal features. On top of the dome, you can see Laetitia’s golden statue. She was the Goddess of Gaiety by the Roman beliefs. It was placed there in 1910, removed in the World War II and finally replaced in 1991.

Wimbledon also features a theatre for children with ages between 0 and 13. It features a studio and a main auditorium. It is also home to a café, various exhibition spaces, an indoor play area, an outdoor playground, a garden and a learning studio.

Transfer from Merton (SW19) to London City Airport by Rail:

Transfer from Merton (SW19) to London City Airport by Car:

Transfer from Merton (SW19) to London City Airport by Taxi: