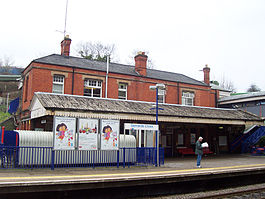 The village of Gerrards Cross is a popular locality and as a result it has been featured in numerous films, TV series and songs. Some of the scenes from the movie Lolita (1962) by Stanley Kubrick have been shot in Gerrards Cross. For example, the house of Charlotte Haze is located in the village. A line from the Monty Python’s Flying Circus, a BBC TV show, includes the name Gerrards Cross. The town’s name is also featured in a Jethro Tull song and a Hit Parade single.

St James’ Church is one of the main landmarks in Gerrards Cross. It is a 19th century building and besides being the parish church, it also hosts a large variety of events such as suppers, debates, cocktail parties, spirituality and prayer courses and many other workshops. Another attraction in Gerrards Cross is the Community Library. You will find it on the Station Road. It is opened to the public on Tuesdays and from Thursday to Saturday. The library benefits from free Wi – Fi access and features large collections of books, games, DVDs, audio books and magazines.

Transfer from Gerrards Cross (SL9) to Luton Airport by Rail:

Transfer from Gerrards Cross (SL9) to Luton Airport by Car: