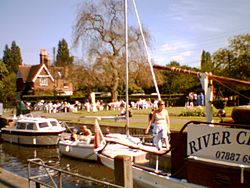 Manygate Lane is the smallest conservation area in Shepperton. It features large houses and a field land that belong to Lyon Homes. This area and the estate reflect the modernism period, as they date from the mid – 20th century. All the houses have terraced and landscaped front gardens and they have been designed by Edward Schoolheifer, a Swiss architect. This type of houses can also be seen in Richmond, London.

There is a picturesque high street in Shepperton. It is home to a café, 2 supermarkets, a public house, the Village Hall, restaurants, hairdressers, a bank and a couple of libraries. The village is also home to a wide array of schools, both primary and secondary. The most prestigious are All Hallows Catholic School, The Ashcombe School, Blenheim High School, The Beacon School, Audley Primary School, Grove Primary School, Holy Trinity and Lakeside Primary School.

Transfer from Shepperton (TW17) to Luton Airport by Rail:

Transfer from Shepperton (TW17) to Luton Airport by Car:

Transfer from Shepperton (TW17) to Luton Airport by Private Hire: